The EntrySat project is a 3 units CubeSat developped by the ISAE-SUPAERO Space Systems for Planetary Application Team (SSPA), with the help of more than 90 students and in collaboration with all other research departments from ISAE-SUPAERO. It is a collaboration with ONERA and Toulouse University, funded by CNES for a launch to ISS in April 17th 2019. It will be released shortly after. .

Orbit collisions and satellite orbital decay have demonstrated that orbital debris represent a potential threat to access to space as well as a threat to ground safety. One promising solution under investigation at CNES – and based on a large Orbital Test Vehicle – aims to clear low Earth orbit of debris by injecting debris into re-entry orbits which ensure a direct controlled atmospheric re-entry destruction. In addition, existing knowledge on the survivability of a satellite or launch vehicle element during atmospheric re-entry remains incomplete.

Further, tracking and predictive capability for the trajectory of small objects, either debris or otherwise, is lacking, as demonstrated by recent events the International Space Station. Although valuable information has been obtained during complex atmospheric re-entries such as during the ATV program, no dedicated orbital debris in- flight experiment has been performed to date.

Therefore, the EntrySat experiment consists of inserting a nano-satellite in the form of a 3U CubeSat into low-Earth orbit (which is similar in principle to secondary debris typically issued from launch vehicles or satellites). A science module operating during the re-entry phase will be able to perform in-situ measurements of the CubeSat environment (temperature, acceleration, pressure ...) as well as integrity (position, rotation speed ...) up to its destruction.

Acquired data will be sent in real time through the Iridium constellation back to the ground segment. This CubeSat is to be injected into a trajectory representative of an uncontrolled atmospheric re-entry with both very low slope and high orbital velocity.

Furthermore, no propulsion subsystem or re-entry protection subsystems will be used during the destructive phase of flight – thus the satellite will respond to the atmosphere in a similar manner as some orbital debris. In verifying the aero-thermodynamic models of re-entry, EntrySat will help to increase the accuracy of trajectory predictions for known space debris and other small orbital objects.

EntrySat CubeSat will be controlled by Centre Spatial Universitaire de Toulouse , through the local ground station. Raw science data shall be sent to the ground station via UHF/VHF (during nominal decay phase) or the Iridium network as necessary through SBD transmission (Short Burst Data).

EntrySat is a mission designed and realized by the ISAE-SUPAERO SSPA (Space Systems for Planetary Applications) Team with contributions from all research departments of SUPAERO, and supported by CNES in the frame of the JANUS student projects. More than 90 students have contributed to the project. It will be launched to the International Space Station on April 17th on the Cygnus NG-11 and released shortly after by the Nanorack pod. Stay tuned !! 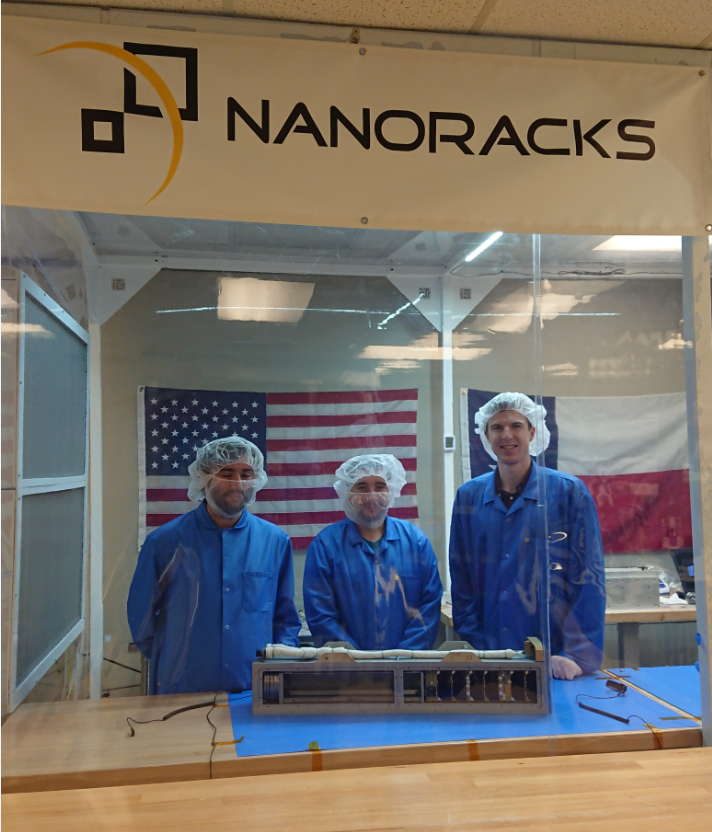 In June 2014, EntrySat thermal and mechanical models we re tested in thermal vaccum Chamber at IRAP, and ICA (...)
Crée le , Modifé le 14 November 2014