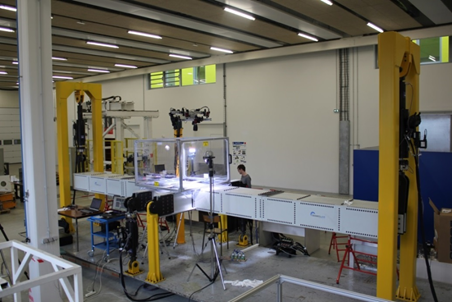 The machine consists of a longitudinal box and two cross beams. The test piece is bolted to the upper face of the box between the two I-beams. Four actuators and two support legs are used. The two actuators at the end of the box place the assembly in 4-point bending and the specimen in tension or compression. The two actuators at the end of the I-beams put the central part of the box in torsion and the test piece in shear. A bladder-based system inserted into the central box between the I-beams allows the test piece to be subjected to internal pressure.