The exergy analysis can be used to perform a powerful aerodynamic analysis by just managing two simple concepts: exergy and anergy. This offers to aerodynamicists a new look into the physics and highlights the places where energy recovery devices can be implemented (drag reduction opportunities). It also provides a simple thermodynamic-based analysis of aerodynamic losses.

According to the Arntz’s exergy method [1], the drag "$D$" of a body in a classical external aerodynamic case (e.g., an airfoil) is simply given by the sum of the exergy "$\epsilon$" and the anergy "$A$":

Exergy is commonly splitted into two sources: mechanical and thermal.

The axial kinetic exergy is mostly associated to the axial velocity deficit inside a wake (or the high-speed region inside a jet plume):

The transverse kinetic exergy is related to the flow deviations and the rotational flow field associated to vortex flows:

And the boundary-pressure work rate is associated to the pressure-velocity coupling mechanism (A velocity increase is created by the expense of a static pressure drop):

On the other hand, thermal exergy is related to the temperature perturbations and is given gy:

The anergy represents the amount of exergy that has been actually destroyed as a result of irreversibilities (proportional to the entropy generation). It is given by:

The entropy generation appears as a consequence of viscous dissipation, thermal gradients and shockwaves, hence, anergy can be decomposed into:

Where the viscous anergy ${\dot{A}_{\Phi}}$ is related to the effective dissipation $\Phi$ (a measure of the rate at which kinetic energy is converted into heat by viscous dissipation - a parameter related to the velocity gradients -) :

The thermal anergy $ {\dot{A}_{\nabla T}} $ is related to the losses (entropy generation) created by the thermal gradients:

The wave anergy $ {\dot{A}_{w}} $ is linked to the entropy generation across the shockwave:

If a survey plane is placed just downstream of a body there is certain exergy available (related to the velocity, pressure and temperature perturbations) as well as certain amount of anergy (related to the losses occurred upstream). As the survey plane moves downstream, viscous and thermal dissipation takes place, which reduces the available exergy. This exergy destruction process is equal to the amount of anergy created (proportional to the entropy generation). Finally, if the survey plane is placed at an infinite distance downstream, all the exergy that was available at the trailing edge of the body has now been destroyed: there is only anergy left.

Since drag is given by the exergy and the anergy, it can be defined the exergy-based drag coefficient as follows:

Given that the exergy represents a recoverable quantity of energy, it is clear that the drag of a body can be reduced if the exergy left behind it is recovered before being destroyed into anergy.

An example of this is shown in the following figure, where the drag curve is shown for a rectangular wing, with a survey plane placed at the trailing edge (1 drag count = 0.0001 Cd). At this position, there is already some anergy created (due to the losses inside the boundary layer) but also plenty of exergy (mainly related to the wing-tip vortex). If this exergy is not valued, it will become anergy: this represents a waste of energy, i.e., a lost opportunity to improve the design. 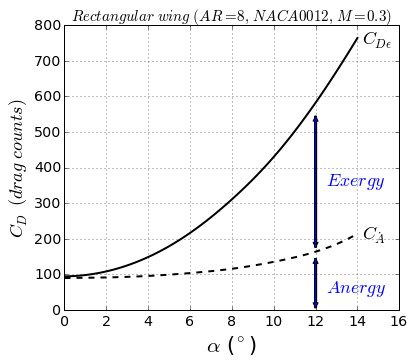