You are here : 2fNIRS » Conference Venue » Travel & Transportation » How to reach the city

How to reach the city

Toulouse is capital city of southwest France and is located just one hour from Paris by plane. It is serviced by most airline and rail services, as well as by the motorways of Southern France. ISAE-Supaero is south of the city center, and can be reached via taxi, metro, or bus. Find here all the information you need to access to Toulouse and the 2015 2f-NIRS Conference ! 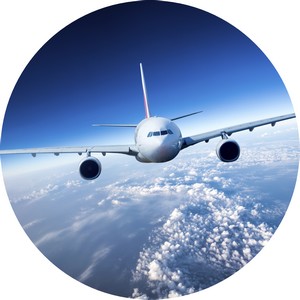 Toulouse-Blagnac International Airport is extremely well located as it is only 8 km (7 miles) away from Toulouse. The City Center can be reached easily with the airport shuttle service or by taxi (taxicab stand outside the arrivals hall). Car renting companies outside the airport also offer a large range of vehicles.

45 airlines service this airport, with 51 daily routes to Paris (Orly or Charles de Gaulle) and 34 other destinations:

Rates: 5€50 for 1 trip. Departures every 20 minutes from the airport and from inner Toulouse, with 4 stops in the City Center: Pierre Baudis Congress Center – Place Jeanne d’Arc – Allées Jean-Jaurès – Gare Routière (terminus, the bus station next to Matabiau SNCF train station).

First departure from Gare Routière to the airport: 5:00 am, last departure: 8:20 pm.

First departure from the airport to Gare Routière: 7:35 am, last departure: 0:15 am.

The shuttle service operates every day of the year (including holiday periods and public holidays).

You can buy tickets from the bus driver. Please look for “NAVETTE - AEROPORT” and the associated airplane symbol. The shuttle will take you to downtown Toulouse, but not to ISAE-Supaero directly (you will need to take the metro or bus from there). Please refer to the directions below (Underground) for more information.

Average cost of a trip from the airport to the city center: 25 €. If taking a taxi to ISAE-Supaero, make sure to tell the driver you want to go to the Supaero (or Rangueil) campus. The university has two campuses within Toulouse boundaries, it is important to clarify which one you are going to.

Toulouse-Matabiau SNCF train station (called ‘Gare Matabiau’) is located right in the heart of Toulouse, in the city center.

You will be able to reach ISAE-Supaero from the train station, but it requires the use of the metro, if you choose not to take a taxi (taxicab stands outside of the arrivals hall): Follow a subway corridor which will lead you to the subway/metro station “MARENGO”. Depending on your preference, there are several options from this point on (see next section).

The underground metro and tramway system costs 1€60 for a one-way ticket. If you are originating from the tramway station, take this line to the terminus PALAIS DE JUSTICE (line B, yellow). From there, you can follow any of the bus combinations as listed below.

Please note that the metro ticket can be used again to board the bus (if the transfer is completed within an hour). You may make an unlimited number of transfers between the metro, the bus, and the tram within that hour, but you must validate your ticket at the yellow machines located inside each bus and tram.

The least amount of walking: From the subway line A (red), get off at the “JEAN-JAURES” station, then take line B (yellow) and get off at “RAMONVILLE” station (also the terminus). Then, take the bus (Tisséo) number 68 (in the direction of “La Terrasse”) and get off at the “ISAE CAMPUS SUPAERO” bus stop.

The fastest way: From the subway line A (red), get off at the “JEAN-JAURES” station, then take line B (yellow) and get off at the “FACULTE DE PHARMACIE” station. Then, take the bus (Tisséo) number 78 (in the direction of “Lycée de St Orens”) and get off at the “ENAC” bus stop. Then walk on Edouard Belin Avenue to ISAE-Supaero Campus (5 min on foot)

The least number of changes: From the subway line A (red), get off at the “JOLIMONT” station. Then, take the bus (Tisséo) number 37 (in the direction of “Ramonville”) and get off at the “ENAC” bus stop. Then walk on Edouard Belin Avenue to ISAE-Supaero Campus (5 min on foot). 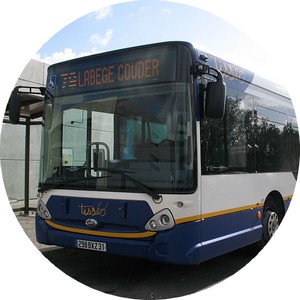 There are several ways to get to ISAE-Supaero, depending on your starting point and your walking distance preference. The easiest way, via bus from the city center, is starting from the subway/metro station “JOLIMONT” (line A/red). Take bus number 37 in the direction of “Ramonville”) and get off at “ENAC” bus stop. Then walk on Edouard Belin Avenue to ISAE-Supaero Campus (5 min on foot)

Toulouse has a direct motorway link with the main capitals of Northern and Southern Europe. Paris-Bordeaux-Montpellier motorway network at the junction of: